Despite the wet, cold and windy morning, 14 cyclists attended the second On Ya Bike! ride, led by Helen.  Unfortunately, three more cyclists, who had planned to ride, were unable to – due to work commitments, punctures and transport difficulties.

The short circuit of Geelong began at Rippleside, taking in the new waterfront path at Balmoral Quay, Cement Works Rail Trail to the old Cement Works at Herne Hill, and the new path through Fyansford development to Fyansford.  While this last path is off road, it’s steep in places, and a little daunting, especially when wet.  However, everyone made it safely to the Barwon River Path for the short ride to Swanston Street.  Refreshments were at Little Creatures – most welcome after the convoluted ride so far.  The weather had improved so the group opted to sit outside, in sun or shade depending on rider preference.

Thanks to all riders, and especially Dirk who did an admirable job as tail-ender.

Next week’s On Ya Bike! goes to Drysdale, via the Bellarine Rail Trail.  The starting point is the Rail Trail, corner Car Street and Tucker Street (near the Showgrounds entrance), at 9am.  This ride is mainly on an excellent shared path, with a short on-road section in Drysdale (to get to that essential coffee stop).  The distance is around 38km. 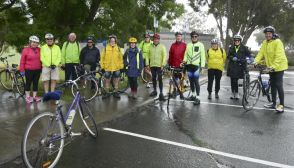 Along the Barwon path 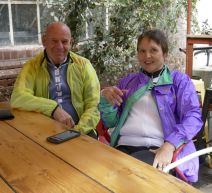 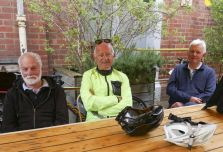 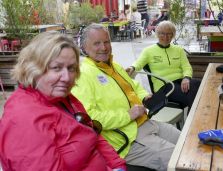 See you there On Ya Bike!

By the time the anti-clockwise circuit was half over, there were around 27 cyclists negotiating the heavy traffic around the Barwon River Circuit, led by Maree with Bill bringing up the rear.  It was girls’ Head of the River so both sides of the river near the rowing circuit were very busy, compounded by large numbers of ‘coaching’ cyclists following the boats much more than the path, and groups of giggling girls walking at will -across, along and stopping on the path.  A sense of elation, excitement and competition abounded.  Maree took the group on a “fast” detour of the criterium track.   Some of us reached speeds of well over 20kph but were quickly put in our rightful place by the training cyclists overtaking at possibly double that speed.

Returning to the river path, it was pleasant to be downstream of the traffic and tittering.  As our usual watering hole was closed for a function, Little Creatures proved an excellent choice for the large group (thanks, Karen, for the Facebook post – I’ve been harassed already by my sister intimating I have an alcohol problem visiting a brewery at 10.30am). 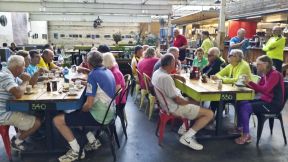 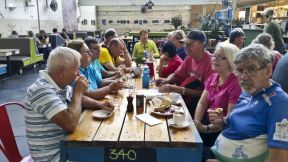 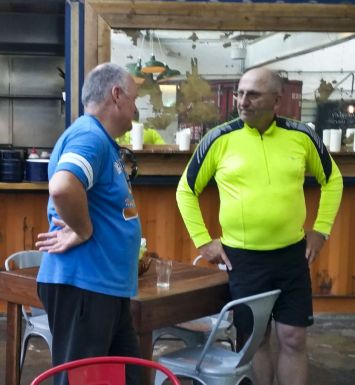 After the stop, the group went their various ways – some avoiding the rowing course, others braving the path back to Balyang.  Thanks to Maree and Bill for organising and leading this enjoyable ride.

Rain overnight heralded a wet morning, and much cooler than Christmas Day.  It was with relief on turning the corner to Balyang, that two cyclists were already waiting for the Saturday morning river ride – Sandra (ride leader) and John H (GTC’s morning ride was cancelled due to the rain).  Rod soon arrived and, on Doug’s suggestion, the river loop was begun in an anticlockwise direction.

The plan was to check out the new ‘Door Gallery Cafe‘ at the old paper mill at Fyansford.  The path was wet, but the rain had stopped.  One ominous sign was that the regular watering hole, Barwon Edge, was closed.  So was Door Gallery – put on hold for another time.

Sandra, Helen and Rod – small wheels were in the majority on this ride

The chimney at the Fyansford Paper Mill

Never daunted, and with the weather improving the next place to try was the caravan park.  “Sure to be open,” we said.  John led us ‘stay on the upper path and turn right past the gum tree’.  We drew another blank – not a camper or car in sight outside the cafe.

Next John suggested the cafe near Faggs in Moorabool Street – likely to be open as there are Boxing Day sales right on site.  After a very quiet ride around the Breakwater, the group decided to try Little Creatures first.  There were no cars parked in Swanson Street, but, as we cycling through the buildings, music was audible.  The outside chairs were stacked against the sodden tables, and all looked quiet.  However, on further investigation – we were in luck.  Too wet to sit outside, coffees were drunk in the heat inside – table service, but no large sized coffees – a definite black mark from one cyclist.

After much discussion of photography and phone aps for cyclists the river loop was finally completed.  There’s still a bit of work to do on the Christmas paunch.  Thanks, Sandra, for being undaunted by the weather to lead this most enjoyable river circuit.

(There was not one dog off the leash, no rowers blocking the path, and we were the only cyclists this morning.)

Today, Swee and Peter were scheduled to take Cycling Geelong’s club ride to Queenscliff.  With temperatures in at least the high 30s predicted, they reluctantly cancelled the ride.

However, they let members know that they were planning to ride the river circuit themselves, and asked anyone interested to join them.

What do you do when it’s hot?

Tell us how you accomplish your cycling goals when it’s going to be hot.  Do you have a favourite ‘beat-the-heat’ ride?  Do you set our early (or late)?  Is there a cool destination?  Send your replies to Helen (webmaster). 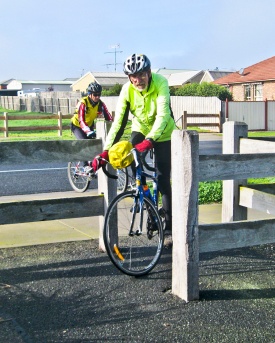 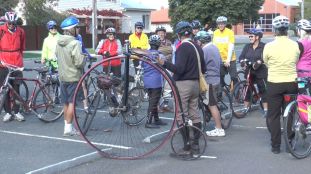 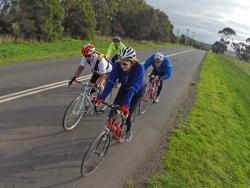