Many Aussie cyclists are skeptical that we can ever change our car-obsessed national identity. ‘It’s all right of Europe, they are cycling-centred.  We can never be like Copenhagen or Amsterdam.’

If possible, the people of USA are even more wedded to their cars than Australians. (Where else do you drive your car to the supermarket complex across the freeway from your house because there is absolutely no other way to get there than by motor vehicle?)

A recent book by Jeff Mapes Pedaling Revolution: How Cyclists are Changing American Cities shows that, even in the land of the Chev and the home of the V-8, there is a move to get more people out of their “steel cages with air bags” and onto  “whispy two-wheeled exoskeletons”.

In the introduction, Jeff Mapes says that there is “a grass-roots movement to seize at least a part of the street back from motorists.”

Jeff Mapes is senior political reporter for The Oregonian, a dedicated cycling commuter and bicycle advocate who lives in Portland, one of three ‘Platinum’ cycling cities in the USA.

He covers many aspects of how Portland, and many other cities in the USA, are becoming havens for commuting and recreational cyclists.  The writing is well-researched and documented but the book is both entertaining and informative.

Mapes describes how cyclists created a political movement, and ‘New Urban Bike Culture’ but does not over-ice the cake.  He briefly outlines the history of the bicycle in the USA, eloquently putting today’s movement into context.   He acknowledges that there are multiple stumbling blocks, and that different cycling groups have differing views on what cycling infrastructure is needed and even differing views on how to ride in traffic.  (One group advocates that there should be no separation or bike lanes for cyclists, who should ride as if they are part of the motor traffic.  Other groups advocate separate facilities for cyclists.  Many concede that while some cyclists are confident and assertive riding in heavy traffic, others require quieter cycling routes separated from motor vehicles either by lane markings or on separate cycleways.)

To put the American cycling experience into context, Jeff Mapes did a trip to Amsterdam in the Netherlands, a place where a majority of city travel is by bicycle.  He rode with the commuters and recreation riders, and commented that both the cost of fuel and the registration expenses for cars are vastly higher than in the USA.  He also visited Paris with its incredibly successful Velib’ (velo libre – free bike) system which in 2009 included twenty thousand bikes and 1,450 bike stations.

Case studies – of people and places – illustrate the changes that are occurring in cycling in many American cities.  For example, one family, the Durnings of Seattle, decided to have a “Year of Living Car-lessly” (outlined on the Sightline blog).  He also features Davis (a college town in California) and Portland, Oregon (a city of more that half a million), two urban communities that have been awarded ‘Platinum’ cycling status (cities are rated – bronze, silver, gold and platinum based on their level of cycling usage, cycle friendliness and infrastructure).  Oregon made the commitment that one percent of all road funding should go to cycling infrastructure.  Despite Portland’s climate (average winter maximum temperature around 8 Celsius, with snowfalls common), 6% of commuters travel by bicycle.  Jeff Mapes titled Chapter 5 Portland Built it and They Cameto show that when there is cycling infrastructure, people will use it.  He also describes the various types of facilities needed – not just on direct road bike routes, but cycleways, quieter urban routes designed to be cycling friendly, and also the vital need for end-of-trip facilities like secure cycle parking, change rooms and showers for commuting cyclists.

In Biking in The Big Apple, Jeff Mapes describes how cycling is becoming mainstream transport for many commuters in New York, mirroring trends in European cities like London.

Many people are afraid to cycle – fearing a collision which would leave them gravely injured or dead.  Once again, Jeff Mapes illustrates this real threat with the case of two Oregon cyclists killed in separate incidents by trucks turning right across their paths at intersections (akin with vehicles turning left in Australia).  Better infrastructure leads to more people cycling.  The greater the presence of cyclists, the safer statistically they (and other road users) become.  Mapes makes the point that the presence of cyclists may reduce the overall speed of traffic enough to reduce the number and severity of collisions without any real effect on travel times.  He states that most cyclists aren’t taught how to ride safely in traffic – learning as they ride –  and that many also ride unsafely and break road rules.  He discusses the pros and cons of bicycle helmet laws.  The case study is included of Ian Walker, a Cambridge UK researcher.  Walker electronically measured how close motorists came to his bike as they passed.  He found that motorists gave more leeway when he wasn’t wearing a helmet, but even more space when he wore  a long blonde wig so he looked like a woman.  Mapes concludes “maybe the best thing I can do is to keep wearing my helmet, but add a blonde wig.”

The chapter on cycling safety is followed by one titled Health and the Bicycle .  Mapes uses his own experience of how taking up cycle commuting led to loss of weight which had been gradually building up since college days.  He touches also on the perception that cyclists inhale high levels of air pollution and cites studies that show that, except where cyclists share a lane with diesel buses, the levels of pollutants inside a car are greater than those outside.  Perhaps we should give cuts in the Medicare levy to cyclists who are lighter and healthier than their motoring neighbours and have a much lower risk of obesity-related illnesses.

Many of us rode bikes as children.  Jeff Mapes is concerned that children today are more likely to be chauffeured to school than to walk or ride a bike, and that many children don’t cycle.  He describes various programs to promote cycling and walking to school, commenting that cyclists and pedestrians are eyes on the street – making our streets safer.

In the final paragraph of the last chapter Jeff Mapes states:

Humans are social animals and most of us want to cluster together in some fashion.  And to me that’s one of the great things about the bike.  It provides a vehicles that enhances the city’s streetscapes instead of degrading them; houses sell for less if they’re on arterials, but they hold their value just fine on bike boulevards.  And bikes can be a lovely way to experience the city.

I recommend this book to anyone who shares the dream of a transport system that includes a more important place for bicycles, and a transport culture where the bicycle has a legitimate place.  For any cyclist, it shows what is possible when people are prepared to work towards more liveable cities through a more balanced transport model.

My copy came from The Geelong Regional Library. 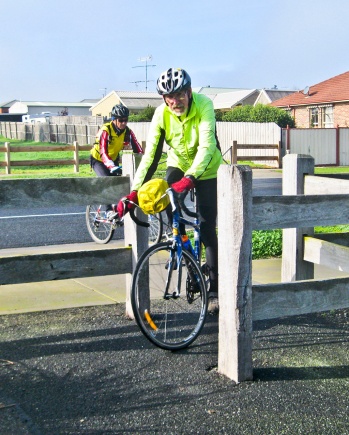 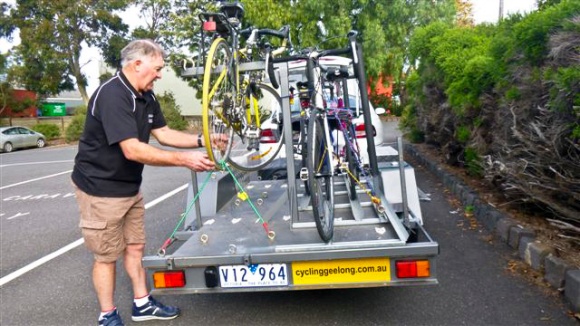