Rod led a total of 26 cyclists on the first of 2021’s On Ya Bike! rides for 2021. Due to Covid restrictions, there were three groups of up to10, led by Rod, Doug and Lynton. As well as 14 Cycling Geelong members, we welcomed twelve visitors – Brenda, Annie, John G, Bev, Mick, Marie, Geoff, Jay, Paul, Vicki, John P and Tseviet. Thanks for your participation.

At the start and along the way, there were stops for history of the river, including pre-European settlement.

Due to flooding there was a deviation at the Breakwater end – around the Barwon Valley Golf Course and past the criterium track, rejoining on the Belmont ride of the river, near the James Harrison Bridge. As the course near Queens Park Golf Course was flooded and muddy, a decision was made to return via Queens Park Bridge. The refreshment break was at Barwon Edge.

The weather was magnificent – especially after the windy, cold and wet weather we’ve had in the last month or two.

Thanks to Rod for leading the ride, our group leaders, Doug and Lynton, those who contributed snippets of cycling history, and all those who joined the first On Ya Bike! ride for 2021.

Next week On Ya Bike! visits Lara, via the northern waterfront and Hovells Creek Track. The ride leaves at 9am from Rippleside Park (near the adventure playground).

Paul and Dianne T. led the ride (with Dianne starting as tail-ender).  There were 13 cyclists, including one non member. 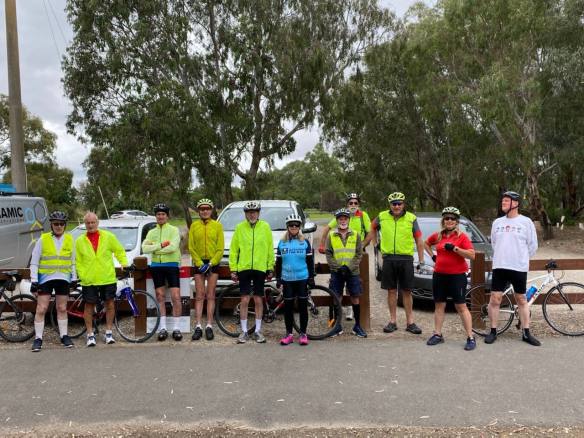 Kevin Clingan was ride leader with 16 cyclists in the group.  Due to rowing, the group had to detour around the back of the rowing sheds.  A new cyclist, Adrian, joined the group from Balyang.

Thanks to Kevin (ride leader) for this ride photo.

The group at the Breakwater.

David led a pedalton of 10 cyclists and a relaxed ride around the river.  They were joined by a lone cyclist, Geoff, at the Breakwater and he continued on with the group and stayed for coffee at Barwon Edge.  Hopefully, we’ll see him again on our rides. 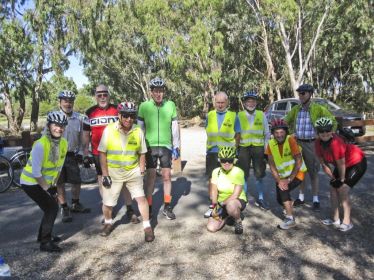 Most of the group at the Breakwater

Richard led 13 cyclists. The only incident was the spotting of a snake near the Breakwater.

The trail was reasonably quiet, and conditions were perfect.  At the Breakwater, Kelly did  a running repair on his water bottle cage, with lots of verbal support from the rest of the group – and physical support from Doug in the form of a strap.

At Queens Park, Doug informed the group that rain would arrive intermittently in 1 minute (thanks to his new phone app.).   This didn’t eventuate despite a few dark clouds.  Coffee was at Barwon Edge where Nancy joined the group for the first club coffee of the year.

Kevin led the ride and sent this report and photo.

Six riders left Balyang on a sunny day, Doug met us on the way, and Herman and Gavin were at Breakwater. There were no incidents.

George Belcher led 10 cyclists around the Barwon River for Saturday’s regular Barwon River ride.  With the path closed under Moorabool Street, a detour was taken for this section.  Thanks to George, ride leader and to the passer-by who took this ride photo taken at the Breakwater. .

Thanks to Rod and Kevin for their reports and expert leadership.

Rod’s comment on his ride on 17th October, “No troubles.  Another good ride with good cobbers.”

Kevin, David J, David F, Peter O, and George rode the river track, which was wet after the rain, but we had no rain on the ride. Doug joined us for coffee at Barwon Edge.

Ride photograph taken at the Breakwater. 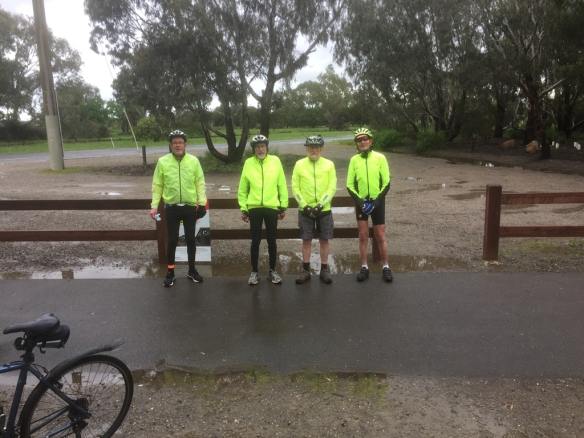