To promote the safety of separated bicycle infrastructure, these kids have produced a music video…

To view the detailed plans, there’s one final drop-in session from 3-6pm, next Tuesday (February 13th) from 3-6pm.

Let the strength of our cycling voices lead to positive, safe cycling infrastructure!

Geelong moved a step closer to becoming a leading cycling city with the opening of the first stage of the Malop Street Green Spine last week.  There is now a one-way cycleway westwards from Yarra Street to Moorabool Street.  As funding becomes available, it is planned to extend this further along Malop Street.  City of Geelong is to be congratulated for this step towards making the Geelong CBD more people-friendly.  (Unfortunately, at least for the present, if you’re travelling eastwards, you still need to use the old bike lane with the hazards of fast-moving motor vehicles, and opening car doors.)

Amsterdam has one of the highest rates of cycling for transport in the world.  It wasn’t always so!  I recommend you read In the City of Bikes:  The Story of the Amsterdam Cyclist by Pete Jordan (available at the Geelong Regional Library) to find out how Amsterdam transformed itself into a cycling Mecca. This is despite the fact that for much of the year, Amsterdam has an unfriendly climate for cycling.

Making a city where most trips are done on bikes requires utterly discarding conventional car-centric ways of thinking about transportation. Norman Garrick

With Geelong’s easy terrain, wonderful climate and the beginning of the Principal Bicycle Network, we’d love to see Geelong transformed to a place where cycling is the norm.

Five reasons why Amsterdam works so well for bikes

For more, here is an article on the five reasons why Amsterdam works so well for bikes.  Underlying all this is designing transport for people rather than cars.  In a city with a greater urban area population of 1.8 million people, traffic deaths are 2/100,000 of population.  Australia’s rate of traffic fatalities is close to triple this.

Look at any photo of people cycling in Amsterdam.  You’ll see  mixture of male and female, ages and many assorted bicycles.  One measure of how well our infrastructure makes cycling safe is the percentage of females riding bikes.

Cycling in Amsterdam. People go about their daily lives using bikes for transport. Low speeds and good infrastructure mean that cycling is safe for all. Image from http://www.local-life.com/amsterdam/articles/cycling-in-amsterdam

There were at least 24 cyclists on this morning’s overcast ride around the river.  It was great to see people from far and wide, including Kelly and Karen commuting from Corio via the Ted Wilson Trail (and conquering Hyland Street on the return journey).

The riders were met by Tina and Gavin at the Breakwater (though Tina’s was a social visit only, due to family commitments), and president John (who’d been chasing the ride) at Queens Park.  Nancy and Heather also joined the group for coffee at Barwon Edge.

The river was reasonably quiet, but this morning’s ride was marred by the aggressive comments and behaviour of one jogger, and a bit of a problem with a couple of out of control dogs in the leash free area.  The Barwon River trail is a shared path.  Cycling Geelong’s riders kept their good temper, and unfailing politeness.  After all, everyone is out on the path for recreation and enjoyment – whether,  pushing pedals or a pram, jogging, or being taken for a walk by their canine friends.

All path users should keep to the left of the path.  Cyclists are required to give way to pedestrians.  However, it is also the responsibility of all path users, including pedestrians, not to block the path, and to control dogs whether in on-leash or off-leash areas.

The City of Geelong’s long awaited elections are now in progress.  Your votes need to be posted by next Friday, October 27th.

As cyclists, we know you’re committed to safe cycling and improved cycling facilities.  When making your voting decisions, consider asking your local candidates about their commitment to cycling.

Do your homework to find the very best council to promote Geelong as a SAFE CYCLING CITY.

Come along and visit from 10-3

Cycling Geelong/Bike Safe is at site 8

We’re expecting a visit from six great cycling Danes with three Cycling Without Age trishaws at around noon. 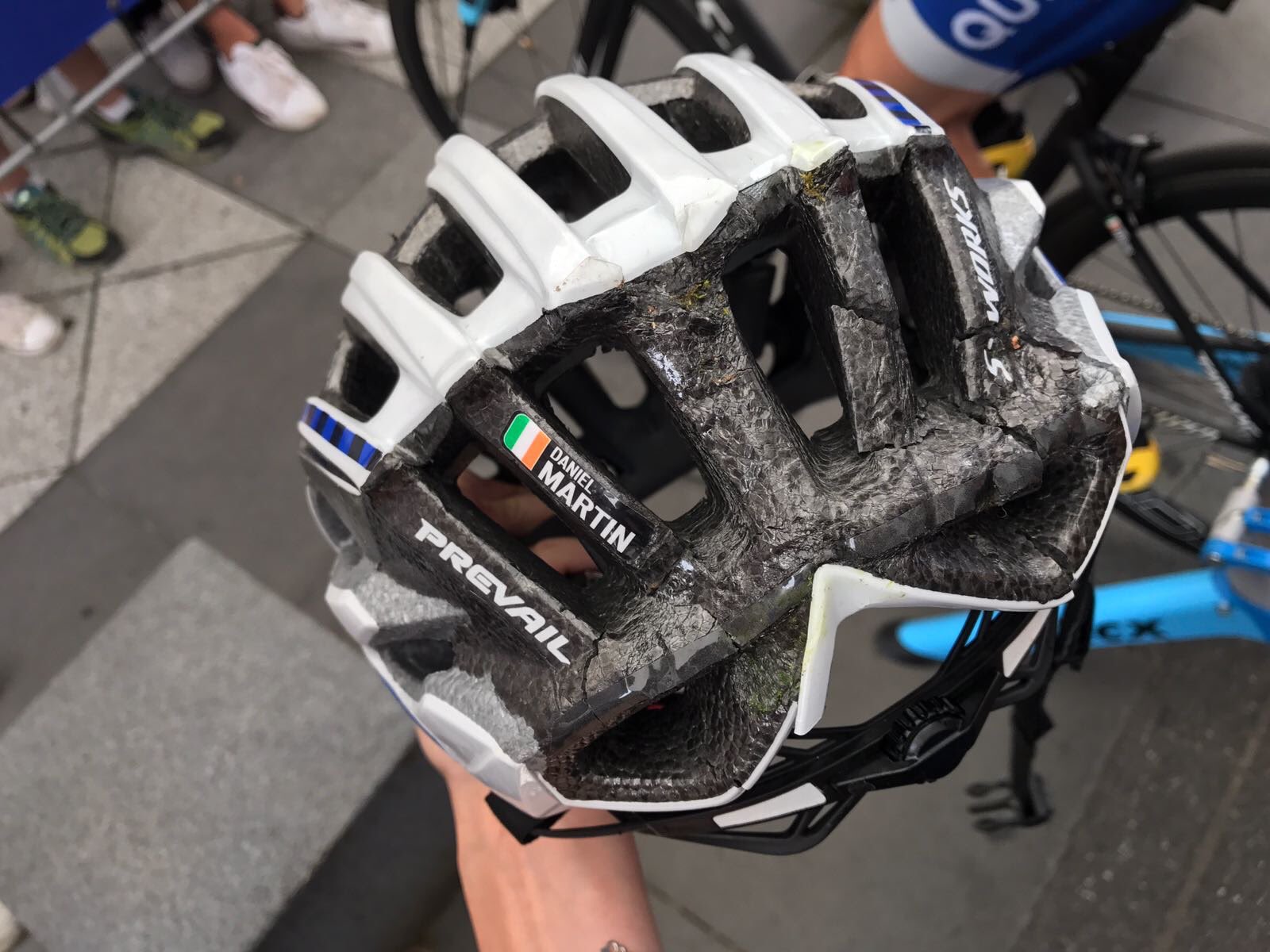 Dan Martin’s helmet after the crash on the Mont du Chat. Would he have got back on the bike if he hadn’t been wearing it?

Richie Porte was also lucky.  Despite extensive grazes, a broken collar bone and a broken pelvis, he had no head injuries after this horrific high-speed crash.  http://www.abc.net.au/news/2017-07-10/pre-race-favourite-porte-crashes-out-of-tour-de-france/8692400

Have you ridden the new rail overpass yet?

Around 30 members attended the dinner meeting on Tuesday, May 16th, at the Belmont Hotel.

The guest speaker was Luke Sherwell, Active Transport Officer with City of Greater Geelong.  Luke talked about the types of issues that are faced in providing safe cycling infrastructure, and showed examples of international and local solutions.  He also fielded questions about issues faced by our members.

Around 30 people attended the dinner meeting

Dave has cycled the Bellarine Rail Trail that day, and brought along a large number of photos of problems with the unsealed section from Drysdale to Queenscliff.

Loose surface – impassable for most bikes

Other issues included the poor shoulders on Bacchus Marsh Road, the unsealed section of the Barwon River circuit at Fyansford, closure of southern end of the Ted Wilson Trail and dangerous railings at head height on the new bridges over Waurn Ponds Creek.

Closure of Ted Wilson Trail at Church street – photo posted in August 2017 when the path had been closed for 6 months.

The only remaining unsealed section of the Barwon River Circuit

Vicki Perrett talked about the pilot program of Cycling Without Age which will be starting soon.  Cycling Without Age involves the provision of electric rickshaws to be based in aged care facilities.  Volunteer cyclists take residents on bike rides – to shops, sight-seeing, for appointments etc.  The program began in Denmark and is now all over the world, including in two places in Melbourne.  Multi-Cultural Aged Care in North Geelong are purchasing one bicycle, and there are plans to fund raise for a second.

It is hoped that a number of Cycling Geelong members will be among the volunteer bike pilots for this program.

Stopping for a tea break

Thanks to guest speaker Luke Sherwell, and to Stephanie and Geoff our social secretaries for organising this most successful evening.

The speaker for this meeting is Luke Sherwell, Sustainable Transport Officer with the City of Greater Geelong.

This meeting is important.

Ted Wilson Trail at Church Street – Still closed on Friday May 12th – the original sign, stating the path would close for 1 month from 8th February.

New crossing on BRT at Drysdale. Upgrade on sealed shoulders.

Did you know that, just by the act of riding, you can help show our council, and others who provide infrastructure, where cycling facilities are needed?

Most people have a smart phone these days.  More and more cyclists are relying on their phones for much more than just making phone calls.  As a cyclist, your phone can record how far you ride, and keep an annual log of your distance!  It can also tell you other things like where you have ridden and how fast, and lots of other data that, up until now, needed a bike computer or sophisticated GPS tracker like Garmin.

To change your phone to a bicycle computer, you need an app.  The most commonly used one for cyclists is Strava.  Because of this, our governments and councils now use the raw data from Strava inform themselves about where cyclists are riding.

When you have Strava on your phone, all you need to do is turn on recording at the start of your ride, and turn it off at the end (it auto-pauses if there are pauses in your ride).  As well as informing you, the data becomes part of the whole picture.

This data only shows people riding with Strava.  If you don’t your cycling movements are only recorded if, for example, you are visually counted on Super Tuesday.

(Click on the above map to see a comparative map of data from 2014 and 2015.  Try zooming in to the area where you ride to see where people are cycling.)

Already quite a few Cycling Geelong members use Strava to log their cycling.  It’s easy.  The ap is free (though you could, if you wished pay for a ‘premium’ service).  It’s important that we show our councils that we are cycling, and let them know where we’d like the infrastructure to be improved. For example, if you look at the Geelong map, a large number of cyclists use Moorabool Street to travel north-south.  A fair number also use High Street Belmont, despite it’s lack of safe cycling infrastructure.  It’s clear that this is a route where safe cycling infrastructure needs to be fast-tracked.  The City of Greater Geelong is progressively adding bike lanes as Moorabool Street is resurfaced, with a long term plan for a dedicated off-road cycle path, but currently the proposed routes for south of the river are sketchy and convoluted.

What the current data lacks is the riding of casual cyclists and those who use their bikes for day-to-day movement around their local area.  This data would be hugely valuable in getting infrastructure in place.  If you’d like to help, give Strava a try.

The aqua, blue and red lines show cyclist numbers – the red is most usage.  The thicker the line, the more cyclists.

Have your say about what needs to happen next

The guest speaker at this dinner is Luke Sherwell, Active Transport Officer for City of Greater Geelong.  Come along to hear what CoGG is doing for cyclists.  Bring your questions, and comments about how cycling infrastructure can be improved where you ride.