Some of the WoW regulars rode to Torquay on the Wed before the Thursday Race Torquay to check out the 13km course. We rode 3 laps in total, with a coffee break between laps 2 and 3. It’s a great course, with a few nice climbs and descents. I wouldn’t like to do 10 laps though!

Race day on the Thursday John M and I were going to ride down and watch at least the Men’s race but after riding the regular CG Thursday ride to Drysdale in the morning I got home and it was just too hot to go and stand in the sun, so I watched the races on the Web, which worked very well.

I was disappointed when I saw that the course had been changed to have everyone ride just the ‘short’ course, but I guess the organisers had to take safety into account as the BOM had predicted pretty bad weather for Sat morning. When I got up, with the plan to ride to the start at Steampacket for 7am, the weather radar was not good! I was in two minds whether to ride at all but things started to clear up and I made the decision to ride up the BRT to Boundary Rd and join the course there. I got there at 8am and everyone who had started at Steampacket were already down the road so I had a great ride on an empty road to Barwon Heads! I started catching up with other riders as I got close to Barwon Heads and then there were lots of people stopped at the various coffee places along Hitchcock Ave. I just rode through, no stops, and made good time back towards Geelong and just got rained on a little as I rode up Boundary Rd towards Eastern Gardens and the finish. I passed through the finish line, collected my freebie water bottle and then rode around the piece of the course I had ‘missed’ back up to the BRT/Boundary Rd corner and then home.

I rode up the BRT and watched the peloton go past at Boundary Rd. I then rode around the river to my brother’s place in Hamlyn Heights for lunch and to watch the progress of the race on TV. We saw the first climb of Challambra and then we headed out on the bikes and rode around the river path, and got to Scenic Rd just in time to see the peloton come blasting down the hill and squeeze across Queens Park Bridge! We then continued our ride around the river and climbed up the access track to Barwon Blvd and then rode up Challambra. The marshals made us get off the road just where the barriers started at the top, at the 200m point, so we walked a bit further up and watched the two final climbs from about the 50m to go point and on the TV screen at Montpellier.

After the race was over we rode down Scenic Rd and made our way down to the finish line at Steampacket via the East/West Corridor cycle route and the Green Spine and ended up scoring a free Mapei hat and relaxed with a beer. Afterwards as I was riding home via Limeburners Rd one of the Cofidis riders came racing past me, doing at least 30km/hr (having just ridden the 170km race 🙂 and disappeared up the Boundary Rd hill. An easy warm down ride for him, no doubt!

WoW Wednesday – making up for the shortened People’s Ride

We decided to ride the newly modified ‘elite’ race course, to check out the changes that had been made this year. We met, as usual, at Sth Barwon Reserve, which is on the course and headed to Barwon Heads. We made a slight change to the route, going via Lake Rd to get away from the traffic on Barwon Heads Rd but rejoined the correct route at the airport corner. We then continued down to Barwon Heads, and through to Torquay. John M told us that he had seen that Bells Blvd is now closed for roadworks for two months so we had to follow the signed detour up the GOR to Addiscott Rd then via Bones Rd back onto the correct route and through past Bells and Southside before doing the pretty tough climb up Jarosite Rd. We then turned onto Addiscott again, in the other direction, and headed towards Gundrys and Vickerys. It was interesting riding these roads as on other WoW rides we have always ridden them in the other direction. This time the climb up Vickerys was fairly hard, normally we would be racing down there towards the bridge at the bottom!

After that the new route is pretty interesting and we made it through for a coffee at Moriac General Store. We then headed up Cape Otway Rd, Hortips, Considines onto Barrabool Rd and back towards Geelong. There was some discussion about whether everyone wanted to tackle Challambra/Westbury and then Melville Ave but we decided to go for it! Those climbs are hard but the group survived well, just Paul H didn’t make it up Westbury. (I saw him today and he said he made it to the roundabout sign just down from the top, but at that point his pedals refused to turn and he had to stop 🙂 so he rode back down and home ). The rest of the group made it up Melville then down Church etc to Steampacket. At that point John M headed home and I rode with Gerry around the rest of the course to complete it at Sth Barwon.

I am impressed by the changes made to the course. It will be interesting to see if it is used for the Peoples Ride as well as the Elite rides next year.

Thanks Dave, for your perspective on this year’s CEGORR. 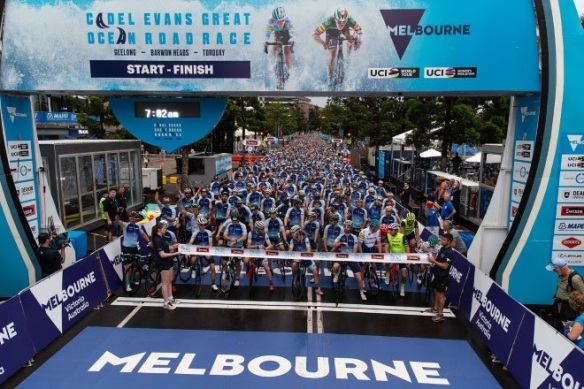 Start of 2020 People’s Ride – We see that Visit Victoria still hasn’t got it that Geelong isn’t a suburb of Melbourne.