Thanks to Ride Leader Robert for this report and photos.

We set out for Southern Cross Railway Station, Melbourne, on the 11,26am Service from South Geelong Station. It was Sunday 24 February.  Hermann and Sandra were already aboard when Linton, Margy, Jeff, Peter M, Kevin and I boarded at South Geelong. Rod and Tina joined us at Geelong Station followed by Coralie at Lara; 11 of us in total.

We departed Southern Cross Station at 1.00pm cycling west up Collins Street which took us down into Docklands and onto the path that led us across the Yarra onto South Warf where we cycled around  ‘Jeff’s Shed’ making our way around to the path besides Normanby Road, that follows the route of the light rail to Port Melbourne.

On arriving at Port Melbourne, we linked up with the Bay Trail which took us past Middle Park, South Melbourne, St Kilda and Elsternwick  Beaches as we made our way to North Point Cafe at Brighton.

It was a beautiful day, the ocean was a lovely blue, there wasn’t a cloud in the sky and there were many people out making the most of it; cycling, walking, skating, swimming, skiing, kite surfing, sky diving, playing beach volley ball or beach netball (there’s a new one!) to name a few of the activities.

We tentatively made our way through the busy area around St Kilda Beach but overall we didn’t have any real dramas. We just went at a steady past and kept an eye out for the unexpected; riding to the conditions.

We arrived at the Cafe at Brighton around 2,30 having covered about 20ks from Southern Cross Station.

We got our return journey back underway about 3.30 after an enjoyable break, some food and, for some, a nice coffee.

We retraced the route back to Port Melbourne where a P & O cruise ship was disembarking.

We continued on through Port Melbourne along the Bay Trail  to the West Gate Bridge where we followed a path that wound through West Gate Park and onto the Yarra.

Following the Yarra the path brought us onto Lorimer Street which led us back to a spot where we could get back onto South Warf, and from there, make our way back through Docklands to Collins Street and up the hill to Southern Cross.

By the time we got to the train it had 5 mins before departed which allowed us enough time to get the bikes on and ourselves sorted. Some of needed to stand until we got to a few stops past the City. There were a few tired bods on board but a great afternoons cycling was enjoyed by all. 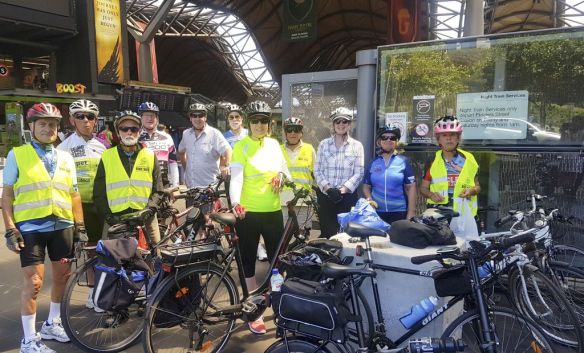