Thanks to Dave Simpson for his take on Around the Bay 2018.

Having experienced the difficult start at Rippleside last year (the start line had been placed at the beginning of the ramp up to the Esplanade, causing many people to fall off as they were starting in too high a gear) we decided to hang at the back of the crowd and to let the crowd get out of the way. This worked well when we did eventually get going as for some reason the start was delayed by 15 minutes.

We set off in the dark for Queenscliff, saying hello to some of our team of CG volunteers on marshaling duty as we went past. The ride down to Queenscliff was fine, no delays and importantly, no wind. We decided it was going to be hard to get onto the 8am ferry owing to the late start (and it would be crowded).  So I decided to resist the calls of the people on ticketing duty at Queenscliff, who were trying to give us 8am tickets, and we held out for tickets for the 9am ferry and had a coffee, having found a seat in the sun at the Marina.

Consequently the ferry journey was great, the ferry was only about half full and we sailed off into the fog which had come in from the bay.

We arrived at Sorrento at 9:50am and got straight out on the road and made good time, stopping off a few times for necessary ‘natural breaks’. There was still just a very light wind, cross/tail, and the other riders were well behaved. I think we had managed to fall into a very well placed time window as the 210km riders hadn’t arrived yet and the 200km ‘Sorrento Return’ riders were just arriving so we didn’t have to contend with too many large pelotons whizzing past!

We eventually got to our lunch stop at Frankston and after a nice rest in the sun we headed off for the final run, with the wind, up to the finish at Albert Park, making sure that we crossed the finish line together!

My certificate says my total ride time was 7hr24m, and my Strava timing says I did the 100km Sorrento-Melb in 4hr41m, including a 30min stop for lunch. Our average speed was 22km/hr.

After (another) coffee we set off to Southern Cross to get the train home.

A big thankyou to my fellow riders, Pete and Richard, and to the team of volunteers. 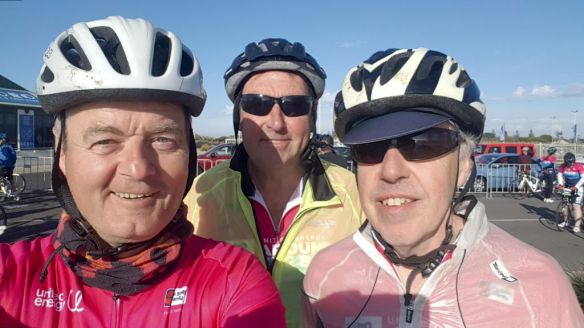