Thanks to Rod Charles, our cycling historian for leading this ride, and to Hermann who was his excellent tail end Charlie.

There were over 30 participants, on a pleasant overcast morning.

Rod began with a short explanation of the founding of the area by Foster Fyans.  Doug provided light entertainment with a newly penned poem “On Ya Bike! – Barwon River Ride”.  There were riders of all abilities and a large variety of bikes – seriously light road bikes, mountain bikes, hybrid bikes, historic bikes like Rod’s Peugeot, at least one e-bike, small wheels, cruisers, Doug’s recumbent Cruzebike and a single speed retro ladies bike.

The group set off around the river path in a clockwise direction.  Several regrouping stops were held, with Doug giving a progressive rendition of AB Patterson’s “Mulga Bill’s Bicycle”. 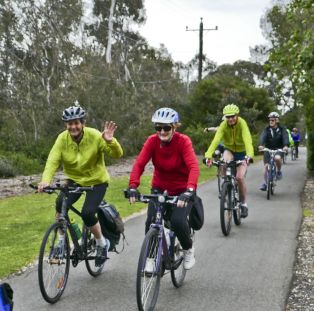 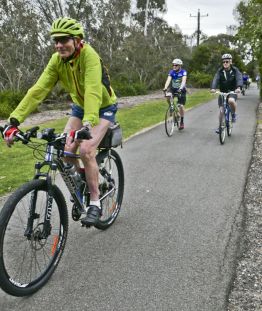 The river circuits provides lots of options for those who would like a shorter ride.  One or two decided to head straight to coffee from the Queen’s Park Bridge.  The rest completed the circuit through Fyansford Common.

As usual, the service at Barwon Edge was excellent, with the whole group served coffee (and other refreshments) with friendly speed.

One of two tables of On Ya Bike! cyclists

Alan has participated in On Ya Bike! since our very first series in 2008

Next Wednesday’s ride in the 2018 On Ya Bike! series is to Lara.

The ride begins at 9am, on Wednesday 10th October, at Rippleside Park, near the Adventure Playground.  It’s an easy ride, along quiet roads and paths, of around 36km distance.  There are a couple of small hills.

The ride will be lead by Helen.

See you ON YA BIKE! 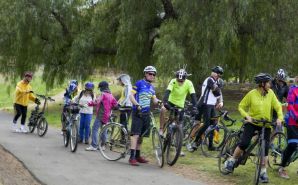