This was more of a roll than a ride – the total km being around 18km return (less for those who left the ride at various points on the return). 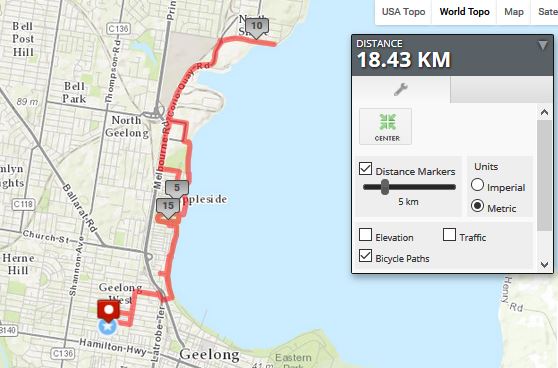 Stella was a gracious ride leader, and also, along with Rosemary,  hosted the first part of the lunch – The Starter.  The delightful setting for this was the Geelong West Community Garden.  As well as eating and drinking, the participants were able to stroll the garden plots, noting the abundance of produce and flowers, the wonderful communities of bees around flowering plants, and communal areas for fruit and herbs.  The eight riders, and one support person, Heather (who drove the ‘sag wagon’ ), ate delicious and varied goodies prepared by Rosemary, Stella and Tricia and filled the tank with a first tea or coffee.  The riders were Coralie (the instigator and organiser of this new event for Cycling Geelong), Stella, Rosemary, Tricia and Shane, Tina and Robert on their tandem, and Helen.

There was a varied assembly of bikes – Tricia and Rosemary were on flat bar Avanti road bikes, Shane on his Dutch Gazelle town bike, complete with racks, mud guards and integrated lights, three riders with small wheels, Coralie – Brompton, Stella – Dahon and Helen (Bike Friday) and a tandem (Tricia and Robert).

After a very short ride, which included the footbridge over the railway at Madden Avenue, the second port of call was Tricia and Shane’s home near the Geelong Esplanade.  The Main Course, provided by Tricia and Shane, Heather and Robert was a delicious combination of flavours from around the world – ratatouille (‘without the rat’ – vegan and gluten free), Indian and Thai curry with rice, and bean salad (Kidney and some other dried beans are native of South America).  By the time the group rolled back onto the Esplanade, it was a very leisurely and replete bunch.  The route continued through Rippleside Park, with a short detour along the new shared path between Rippleside and St Helen’s Park – open for a couple of weeks from Australia Day, but now closed again by the developer of Balmoral Quay.  This waterside link will mean that walkers and cyclists will no longer need to take to suburban streets to go north from Rippleside Park.

The only ‘hill’ for the ride was from Corio Quay up to North Shore – a gentle ride indeed.  The final port of call was at Coralie’s, with a stunning view across Moorpanyul Park to Corio Bay, the shipping channel with Geelong basking in the afternoon sunshine.  Here coffee and tea were accompanied by sweet goodies – biscuits and cakes provided by Coralie and Helen.

It was a replete bunch of cyclists who wended their way back around the waterfront.

Thanks to Coralie, for the idea and organisation, Stella for leading this most enjoyable ride, our hosts Stella and Rosemary, Tricia and Shane and Coralie, and all participants who helped provide the extremely substantial and delicious lunch-afternoon tea.  Thanks also to Heather who, fortunately, did not need to add her skills as sag wagon driver.