Thanks to Michael Lindsay for leading this very popular ride. 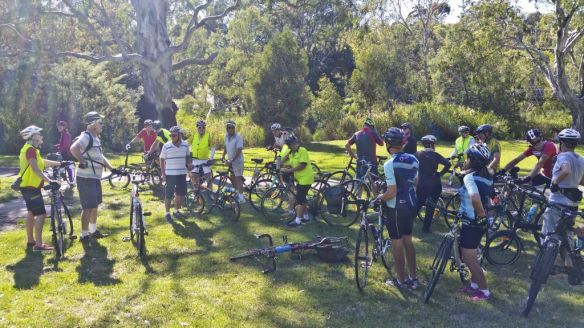 The riders regroup at Queen’s Park

Michael’s report.
Great ride with a refreshing breeze, 24 – 25 degrees and sunshine.  Great attendance with 36 riders including 4 “e” bikes.  Coffee at Barwon Edge and all riders accounted for by the whip David Fisher.  Particular care was taken due to the rowing regatta near the rowing finishing line and the boatsheds.

Thanks to Ride Leader Michael and David, tail-ender.

Do you know who owns this lovely teddy?  Teddy was left by his family while visiting Barwon Edge just before Christmas.  He’s being fostered by the staff and well looked after by the patrons, but would love to go home to his family and, especially, his small parent.  His foster family have given him the nickname “Bobo”.

‘Bobo’ enjoys the fare at Barwon Edge, but longs to be reunited with his family.