Thanks to Geoff Andrews for this report.

A few weeks ago Stephanie attended a Trefoil Guild  ( ex Girl Guides ) State Gathering in Wangaratta for a few days. She really enjoyed her time and catching up with 97 other members from all over Vic, including 8 ladies  from Geelong. It was a great opportunity for both of us to take our bikes and ride some of the Rail Trails. We stayed with our friends in Wang  for a few days and also at a local motel in Wangaratta.  The weather was perfect not hot, vivid blue sky and no wind for the 10 days away !

Amongst the many rides we did was  part of the Murray to Mountains Rail Trail from Bowser  (5kms from Wangaratta ) to Everton and back 46 kms in ideal conditions.

On the trail we met only 6 cyclists, saw a tortoise, an Echidna,  and a deer running with us amongst the trees for 5 minutes. We were patient when a herd of  cattle crossed the rail trail near Tarrawingee.

The trail from Everton to Beechworth was a steady climb ( about 400 metres ) on a beautiful late spring day. All the trails are kept in perfect condition in this part of the North East. We even went back and did it again a few days later ! 15 kms up and back

The roads to Springhurst (near Chiltern ) had light farm traffic which was always considerate of cyclists and the surface so easy to ride on with no potholes or ruts anywhere. It was a pleasure to ride them and so wide compared to some of the roads in and around Geelong!

The ride on the cycle  path to Milawa from Wangaratta and back saw many other cyclists, 30 km return I think a few of them popped into Brown Bros to sample some of their magnificent reds whilst in the area. Why not !

We spent a  few days in Bright riding to Myrtleford and back about 60kms also we rode out to Harrietville via Smoko and back 35 kms. 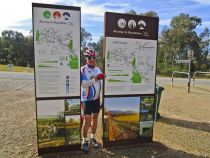