Thanks to Robert, ride leader, for this report.

Thirteen of us, Club members, some family and friends, gathered at Footscray Station as the starting point of a ride to Altona Beach, via Williamstown on Sunday 17 September. We have a beautiful, sunny spring day.

We rode the path along the Maribyrnong River, Hyde Street, to under the Westgate, and along paths that followed the YarraRiver and the Bay to Williamstown. The sunny day saw many people out enjoying the weather and beautiful location. The path through Williamstown was quite congested with pedestrians, prams, other cyclist and a couple of young fellas who hadn’t yet learnt the etiquette of sharing paths!

There was much to see and enjoy as we cycled along passing Williamstown Beach and then on into the Altona Coastal Park and tracks to Altona Beach where we enjoyed a bite to eat and relax. There were plenty of people out and about making the cafes quite busy.

Neil and Laura and Sally left us at Altona Beach. The remainder of the Team cycled back through Williamstown to Footscray Road where we headed for Southern Cross station the catch the train back to Geelong.

The ride took longer than anticipated but we all enjoyed our day. With the warmer weather we spotted 3 blue tong lizards then a tiger snake sunning themselves at the edge of a path. Being an observant leader the call went out to following cyclists something like this; Lizard, lizard, lizard, snake!!!!

Well done to everyone on the ride. We had a great day. 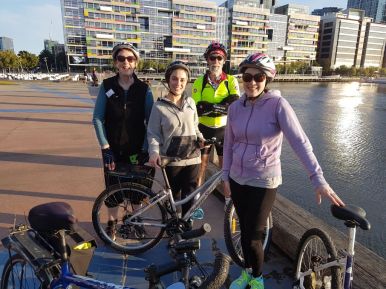 The next City Ride is from Southern Cross Station to Abbotsford Convent/Dwight’s Falls on Sunday 22 October at 1.00.