Doug and I rode the (in)famous Melburn-Roobaix event on Sunday 25th June. Doug had ridden it last year and it was the first year for me.

We took the train from Sth Geelong to Southern Cross – it was an early start to get the first train at 6:43 but we made it and got to Southern Cross at 8am. Doug recognised some riders who work at the Viva refinery and we found out they were also riding the Melburn-Roobaix so we tagged along with them for the ride to the start point in Hawthorn, along the Yarra Trail. Easy.

We met up with the other members of our team for the day, Doug’s son Alistair, and Alistair’s friends Zack and Mel. Registration for the event was quick and easy and we were soon on our way, with lots of other cyclists, shortly after 9am.

There are no closed roads, marshalling or other niceties for this event, you are given a map and a set of questions to answer on the way to the ‘Roobaix’ finish at Brunswick velodrome, with a needed arrival time of before 3:30pm as that’s when the prize draws take place.

We basically followed the crowd, it’s hard to estimate the number of riders but there must have been at least 1000. At some points along the way we managed to cause quite a traffic jam, but luckily the car drivers out on the same route were well behaved and gave us room as we came out of cobbled lanes across streets in Hawthorn, Coburg and Brunswick.

We didn’t get lost, stopped for a coffee and lunch and made it to the finish at 3pm. Sadly none of our team won any of the prizes on offer. We did manage to pick up some free stuff though, including a year’s Bike Assist membership courtesy of the RACV.

Maybe next year I can persuade Doug to break out the fancy dress and we can compete for one of the prize categories!

It was a great day, unlike any other ‘organised’ cycling event that I have ridden. Already looking forward to next year. 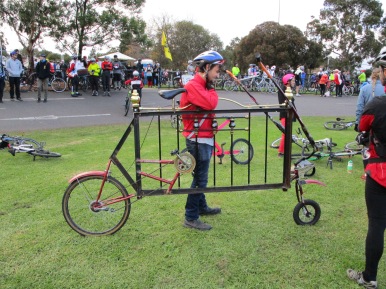 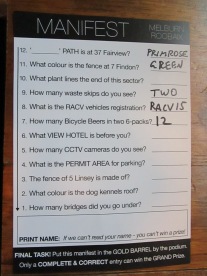