Although it was also a joint ride day, Rod had been invited by Bicycle Network to run a Geelong event to celebrate 200 years since the invention of the bicycle.   The ride began in Eastern Park.  Thirteen cyclists braved the chilly morning.

Rod explained that the first recorded 2-wheeled human powered vehicle was the running machine (laufmachine or Draisine) invented by Karl Von Drais in 1817. 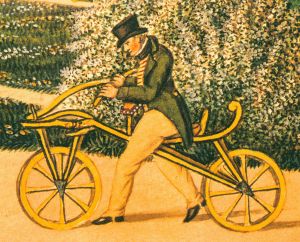 This had no pedals – the rider scooted and rolled.  The machine was constructed of wood and iron, and the weight meant that only able-bodied men were likely to be users.  As the roads were too rutted by cartwheels for easy riding, Draisine riders took to the footpaths – leading to the first conflicts between cyclists and pedestrians.  Despite their weight, Velocipes (as they were soon named) were fast and efficient.  The reaction of governments was to ban their use in several countries including Great Britain, USA and Germany.

Today’s bicycles have firmly established the use of pedals for propulsion.  The oldest bicycle on the Cycling Geelong ride was a Gazelle, purchased some decades ago and ridden by Simon Watt.  This bike is steel, and sturdy – 22kg, with front and aft racks.  While in Amsterdam, adults are often be seen riding on the racks, Simon assured us that he uses his for transporting a crate of wine.

Simon with his Gazelle 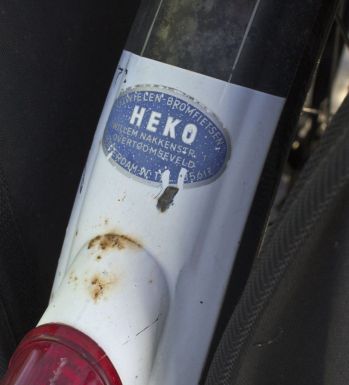 The bike still has its original bike shop label

The group heard more of the history of bicycles, and their use in Australia and Geelong whilst waiting for a photographer from the Geelong Advertiser.

Rod explains the significance of the occasion

Oblivious to the cyclists assembling within metres

The group finally got underway along the new Eastern Beach bikeway to Point Henry.  In early years Point Henry was a popular tourist and recreation destination.   However, if one wished to ride through Eastern Park, it was necessary to dodge the many goats which grazed there.

Thanks to Rod for once again running a most successful history ride.

Read the article in this weeks Geelong Indy about the birthday of the bicycle http://geelongindy.com.au/indy/2017-06-08/birthday-bicycle-takes-a-ride-around-town/

Keep your eyes open for news of our Seniors Month rides, when Rod will again lead the popular “History around the Barwon River” ride.