Thanks to ride leader Stella for this report

22 riders met at Rippleside for the yearly seniors ride with Cycling Geelong  It was  a windy day and grey skies but  bright enthusiasm  from the group.

The ride to Lara was uneventful  no rain and pleasant views  The riding track was good a small flood at  Hovells Creek and a tree on the path but easily maneuvered by all the group. 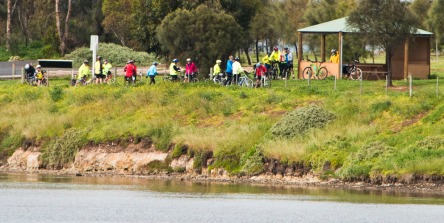 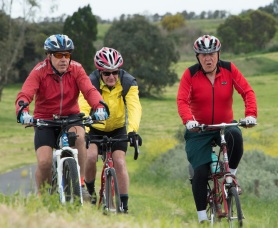 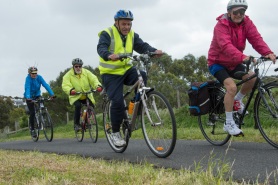 Coffee was at the new cafe within the shopping centre at Lara called 7Grams – highly recommended. Good seating for a large number  of people       friendly staff and delicious cakes and coffee. 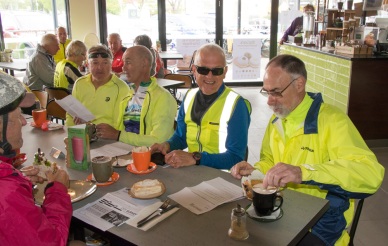 Unfortunately the return ride was with some  minor difficulties.  3 punctures ! and very heavy rain and quite windy.  Consequently the group became  divided with some waiting and some going!  However excellent team spirit was  shown and all was sorted out very quickly.   Thanks to everyone who helped out with the punctures.  That was  very much appreciated by me !

The last riders arrived back at 12.30 a little later than planned  and also very wet, but it was a great ride.

Thanks to all who rode  and joined our team.  We were happy to welcome new riders to the series – Bernard Costa,  Dirk Vanderburg and Lynton Leigh and welcomed back Judy and Ken Machin who ride with us for the first time last week.

And from ‘tail end Charlie’ – your editor…

Stella was today’s ride leader.  Despite strong south westerlies and a lowering sky full of storm clouds, twenty-two cyclists set off for Lara from Rippleside Park.  The road was dry.  The first incident occurred even before pedal turn.  Chris’s chain was off both the cluster and chain ring, and required a little coaxing (with moral support only from tail end Charlie – also doubling as CG web coordinator).  The ride to Lara is pretty flat, with only two potentially irritating rises.  A couple of riders were caught out by the St Helen’s cliff road – short, sharp and needing a low gear (or high level of bike fitness) for comfortable riding.  Doug caught up to the group at North Shore, riding his Cruzbike.

Most of the ride to Lara was on bike paths, including Hovells Creek Path.  The path under the highway was passable, though still a little wet from the recent rain.  A fallen tree on the path at Rennie Street was easily detoured (except for John H, who, on the recumbent, was able to ride underneath).  Hovells Creek itself was still in minor flood near Lara.

Stella always does her homework.  Coffee was at a newly opened cafe in the Lara shopping centre – great venue with plenty of room for our large group.

It was on the way home the fun started.  First, Ric, then Jeff, then Chris, all had punctures.  Chris’s was the most spectacular, a sudden implosion due to a broken beer bottle.  Thanks to the support of other riders who stayed to help.  At Limeburners Lagoon, the group was welcomed with light rain, which eased off as soon as rain gear was donned.  However, by North Geelong it was raining steadily, and by St Helens, the rain was a torrent.

So the 3 Ps were not only the positive fun of pedalling in an On Ya Bike! group, the pluck of those who coped with various adversities, and the perseverance of everyone in cold, wind and rain, but 3 punctures.

Thanks to Stella for leading the ride, our mechanically minded puncture mechanics and once again, to John for the photos. 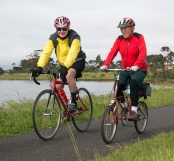 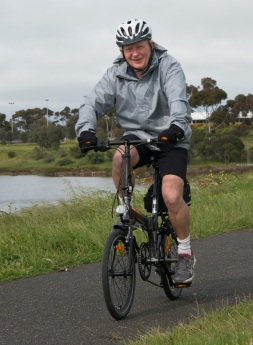 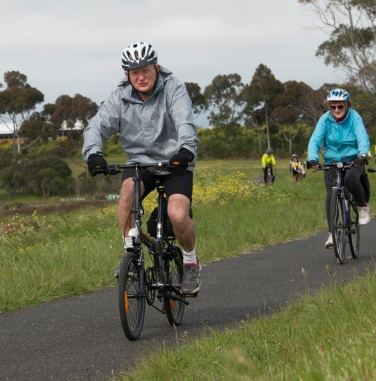 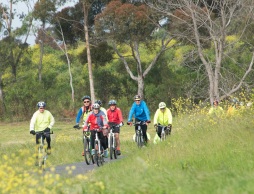 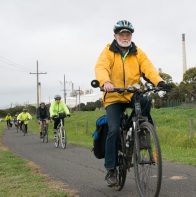 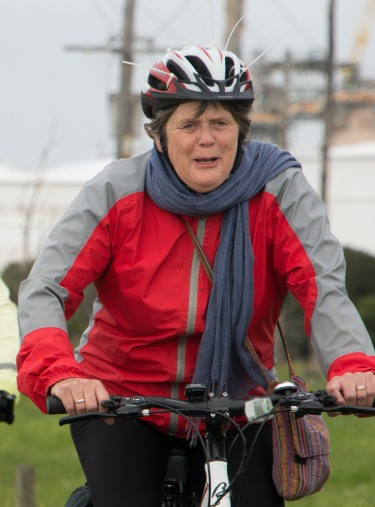