Today was a combined ride with Cycling Geelong and Geelong Touring Cyclists, led by Ross from GTC.

Thanks to Ross for this report.
Seven riders fronted at South Geelong station; Helen, Bridget, Mike and John M from Cycling Geelong plus Rolf, John H and Ross from GTC. Ride was scheduled for a 9.00 start but when I suggested we set out, one of the CG people asked why we weren’t “waiting for Noel”! So departure happened at 9:05.
Our route took us up Aberdeen Street and through Herne Hill before the big downhill run on Hyland Street – those recumbents are very fast! We turned left off the Hamilton Highway on to Merriwarp Road then right on to Barrabool Road.
Plenty of opportunity to work the legs on the undulations there and on Devon and Reservoir Roads before the lovely downhill run to morning tea at Moriac’s Raven’s Farm. Quite busy there so lucky that Rolf had arrived quite a bit earlier than the rest of the group and had claimed a table. He was also halfway through his coffee when we arrived! Lots of conversation here as we leisurely worked our way through drinks and their specialty “organic” scones/cakes/slices/jam/cream/etc. Rolf decided that time was marching on and set off home while the rest finished the last of our fare.
The return trip continued the leisurely vibe via Mt Duneed Road, Baanip Boulevard, Bailey Street, the bike path, Belmont Common and the Barwon River bike path back to South Geelong Station. Warm temperature, light winds, quiet roads and good company – thanks to all riders for a most enjoyable outing.
Regards, Ross.

Editor’s note:  This was Bridget’s first ride with our group.  She’s a relatively new rider, who succeeded in cycling the 210 km route in ATB this year.  We hope to see her on many more rides. 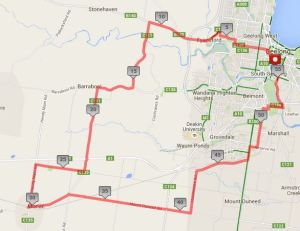