Several Cycling Geelong members participated in Around the Bay this year.  As well as this twenty volunteered to run the section of the 250km route between Drysdale and Queenscliff, led expertly by David and Nancy, with Robert ‘leader in training’ learning the ropes.

If you rode ATB, or had involvement as a volunteer, we’d love to share your story with our readers.  Please send reports and photos to the webmaster, Helen.

Stephanie & Geoff rode the 50km ATB Ride  yesterday. It was a fantastic day with almost perfect weather, blue skies, little wind & not blazingly hot. The distances were  from 20kms – 250kms I got “a kick ” out of riding up & over the Westgate Bridge in both directions as I enjoyed the steady climb & the exhilarating freewheel down.

My max speed was 53 kms P/Hr…one still had to have their wits about them as to who was around or near you whilst descending.  I was probably one of the quicker ones in our  group  but certainly not the fastest.

We were delighted to see so many younger children aged 8-12 years riding the 50kms with confidence & determination, obeying the road rules & being courteous.

After speaking with Bicycle Victoria  officials everybody was pleased to receive their timed results so promptly after crossing the Finish line.

The real winner was people on bikes riding their chosen distance who will continue to ride regularly until next time next year when many riders will increase their distances. 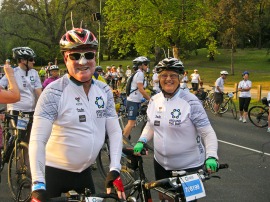 Geoff and Caroline, Peter and Helen made up the team.  The first few serious teams shot past pedalling fast at around 9am.  By 9:30 riders (all male to this point) began to avail themselves of our friendly service.  Despite the problems with the bidon bar (we’ve never had a year when everything ran smoothly), cyclists refilled bottles, rested for a few minutes and managed to top up on essential energy with Caroline’s magic lolly bowl (never empty).

The advantages for the team were many – we met amazing people, gawped at millions of dollars of bikes and bike bling, collected a spare mobile phone (now returned to it’s anxious owner) and generally admired the stamina and determination of this amazing group of cyclists.  The riders were – to a person (there were some elite women appearing by 10am) – grateful, cheerful and friendly.  This all happened on a sparkling day with a view of pelicans fishing from the wrecked paddleboat near the shore.

We supplied a bike stand (picnic table), floor pump and lots of advice (and some long nosed pliers) for mechanical incidents, and a couple of spare tubes were accepted by some unlucky riders who’d had multiple punctures.

I spotted a man delving in his handlebar bag, bringing out what looked like a folding pump.  ‘I’m fine,’ he said.  ‘It’s actually a walking stick.’  He unfolded the stick and limped off to fill bottles and use the facilities.  Despite a leg deformity, he rode the 250 km route.  He’d come from working in Germany to ride ATB and compete in a marathon next weekend.

Next year maybe we’ll welcome a fellow member of Cycling Geelong stepping up to the super-challenge of 250km Arount the Bay in a Day.

Thanks to David and Nancy for their amazing support.

Thank you all for volunteering for this years Cycling Geelong participation in Rest area and marshal duties for the 250km around the bay ride.

It all went very well thanks to your effort and I was able to return the van and equipment  to the Bicycle Network depot in Sunshine by 4:30pm.

I returned to Geelong by train and met Doug Merrit on the train also with his bike.  He was returning from Melb. after completing the 135km ride from Geelong.

This year Robert Turnour helped with the van pick up on Saturday and came around to the rest areas and marshall locations on Sunday to see how our volunteering is organised.   Robert will take over the organisation of this event for Cycling Geelong in 2016.  I am sure you will all continue to support Robert and Cycling Geelong in 2016 for this event.  I will assist Robert if required.

David has been Team Leader for the 250km section of ATB for quite a number of years.  It’s a tiring and time-consuming job – his shift begins on Saturday, picking up a van in Sunshine, and ends when the van is returned late on Sunday afternoon, after driving many kilometres distributing and picking up equipment, and generally supporting the event.  This year, he also had to collect all the signage on the 250km part of the route!  Well done David (and Nancy) for this fine effort.