Tour of the Goldfields Bike ride

Friday 2nd October we left at 2 30 pm from Allan’s place in Norlane West, with Heather’s car locked safely away in Allan’s garage. 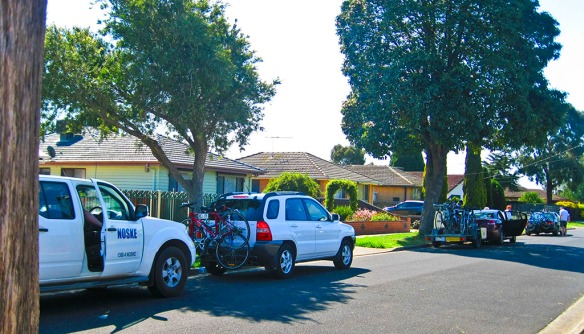 The convoy sets off for Lake Laanacoorie Caravan Park

We then headed for Daylesford – a slow trip.  One car lost a bike seat between Anakie 7 Ballan and had to go back, then Tina’s car was too slow to keep up.  After Daylesford some people took their own route but we all eventually made it to Laanecoorie.  We had dinner at Newbridge with everyone joining in and having a good time in a country pub.  My brother lives next door & his wife ran a raffle that night.

Itinerary For the trip

We started the ride at 8am & headed for Tarnagulla about 11 km.  We rode rode around this old town.  There are no shops only one pub but 6 churches. We loaded the bikes on the trailer and headed for Moliagul 23km.  We stuffed up a little here but all was o.k. in the end.

We rode to Welcome Stranger site on dirt roads and back then visited the Rev John Flynn memorial,  commemorating the birth place of John Flynn founded of the Royal Flying Doctor Service.

It was here where we decided to ride back to Dunolly via Goldsborough, have a bite to eat at the bakery then ride around town to the historic sites.

We visited the old Dunolly Court house & Police Station & Stables see pictures of Russell back in his old job and most of the Riders as the Jury of the Goldfields Ride.

Robert tries out the feel…

We had no time to go to the old town of Bealiba but we did ride the 18 km back to Laanecoorie in time to shower up and watch the Grand Final.  (Editor’s note: What final?)

Saturday night dinner was a barbecue for the 15 of us at the house.  Allan catered for this – bringing supplies from Geelong, with the cost shared between the group (where else could you get a substantial meal at $7 a head, with leftovers for a midnight snack?).

Everyone agreed over the barbecue that it was a great day’s ride and presented Allan with a card signed by all and a great bottle of red wine.  Thanks for thinking of me.

We loaded the bikes on the trailer and drove to Maldon.   First we drove up to the top of Mt Towengower then onto the Railway station had a look around. 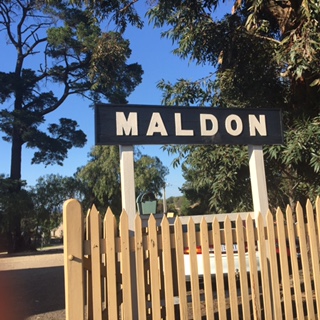 Went to the old North British mine, most had a look around Russ lost $50.00 here took the bikes off then rode to Newstead via Welshman’s Reef.

At Newstead we fed the hungries in the bakery.  There was a big Swap Meeting on at the old Newstead Racecourse which made the road very busy.   There was no other way out so some riders put their bikes on the trailer. Next we headed towards Castlemaine, taking the turn off to Campbell’s Creek to the Five Flags Hotel for lunch, where there was good parking here for the car shuttle.  When we arrived we found out that Tina’s Mother & friend Debbie were still back at Laanecoorie as their car wouldn’t start. Robert sorted that out. 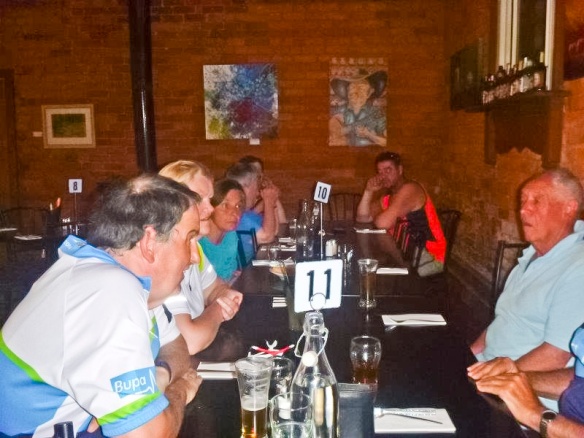 After lunch we went into Castlemaine to the Information Centre, some of us rode around town.  We decided not to ride the bikes from Castlemaine to Muckleford to Maldon.  We had packed our overnight bags in the cars earlier to leave from Maldon for Geelong. We didn’t go via Clunes. I must mention that this ride was a big success because of the big help from Karen’s Husband Nick.  Without him I don’t think it would have been the same so thanks from all of us.

Will it happen again? The answer is “yes“.  Next time the Goldfields tour will take in the western area around Avoca including some of the Goldfield’s regional Wineries.

Editor’s note:  Thanks, Allan, for leading another successful Cycling Geelong tour.  (Russell isn’t the first person to lose his dough on the goldfields.  Perhaps it’s ‘poetic justice’ because you drove up Tarrengower instead of cycling.)

Relaxing back at Base Camp