Some hundreds of riders congregated in Eastern Park to honour Gordon Ibbs, who was killed by a hit-run driver near Anakie two weeks ago.  (Estimates range from 300 to over 500.)  The ride was organised by the Geelong Cycling Club – which had a large contingent of riders, including many juniors.  There were large contingents of Wyndham and Melbourne cyclists.  A group from Port Pedallers had ridden from Drysdale.  It was good to see a large number of families. Gordon’s daughter spoke about her father’s passion for riding, stating that he would have been honoured and embarrassed by huge response. Cycling Geelong was represented by a number of us – I spotted Peter and Swee and John M.  Former member Fiona was also there. There were two ride choices – 12 and 20km – out Portarlington Road to Point Henry turnoff, with the longer ride going to Point Henry and back.  There was also a 4km walk through the park. The event was covered by at least two national TV newscasts.

The riders bunch at the start for a slow, non-competitive ride 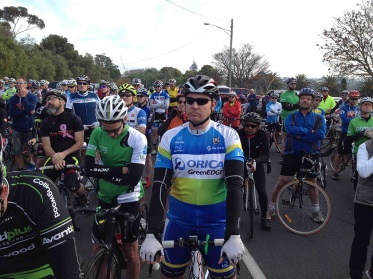 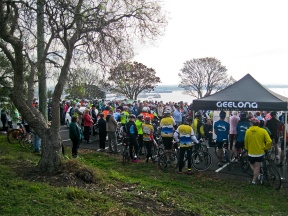