Four cyclists (David J, David F, John M and Helen – ride leader) departed at 8:05 for a saunter to Moriac, via quiet roads and paths.  Having made their way to Heyers Road, the group detoured to check out the new Waurn Ponds Station, before riding south on a short section of the Ring Road bike path from Hams Road to the Anglesea Road.  After only a couple of hundred metres of highway, a right turn took the cyclists into quiet Reservoir Road.  Only a couple of cars were encountered.  By now, without protection from suburbia, the full strength of the south westerly was slowing a couple of riders (notably the leader – leading from behind as usual).

John M, on a single speed Wilier, had blitzed the field, and took the photos.  Thanks John.

The fast run down to Moriac was a exhilarating.  Coffee (and Devonshire tea, if you like over-sized fresh scones and homemade berry jam) at Raven’s Creek Farm is highly recommended.  Raven’s Creek Farm is a working farm with berries, cattle and pigs, completely chemical free and free range (the animals, that is- the berries are confined – one could say ‘humanely caned’ for easy ‘pick your own’).  The kitchen garden is full of fresh seasonal vegetables and herbs – which are for sale and feature on the menu.  It’s a great resting and refueling stop – though we also enjoy the Moriac General Store – another bike-friendly venue.

A notable feature of the Hendy Main Road section of the ride was the large number of cyclists riding in the opposite direction.  Clearly, many were in training for the Cadel Evans Great Ocean Road People’s Ride which was our route for last week’s joint ride.  We’re looking forward to watching the world’s best ride on Saturday and Sunday 31st January and 1st February.  (Keep checking the website and ride calendar for Cycling Geelong news about the event.)

Our group continued south and east on Hendy Main Road, then returned to Anglesea Road via Blackgate Road.  It was ‘payback’ time with a strong tail wind.  At Freshwater Creek the cyclists took the route along Dickens and Ghazeepore Roads.  David F turned off to take Heyers Road back to Marshall.  David, John and Helen returned via Pigdons Road and Bellevue Road to the Barwon  where David branched onto the river path, and John and Helen proceeded to Pakington Street, parting company at Church Street. 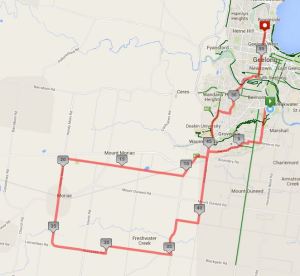 Thanks to all riders for a most enjoyable mornings cycling.