Riders who tackled our version of Cadels ride today all deserve a medal and thanks to Helen for leading the ride. Today was our monthly Joint Club ride between Cycling Geelong and Geelong Touring Cyclists. We started at 7.30am from Steam Packet Gardens finished there at 3.30pm after covering exactly 111km. The route we took was almost exactly the one the inaugural Cadel Evans People’s Ride will be on January 31st (but missing the ultra-steep Melville Avenue challenge). 12 riders turned up: from Geelong Touring we had Rolf, David I, Peter J, Zak, Ian and Chris (newly arrived in Geelong from Shepparton; from Cycling Geelong we had Helen, Karen, Tim W, Doug, Mike C and myself.

The ride is well named after Cadel as it is a gruelling challenging hilly (up to 14 degree elevation) but scenic ride through Barwon Heads / Torquay – Bells Beach and Barabool Hills before return to Geelong. We had 3 well deserved coffee stops at Barwon Heads, Torquay and Moriac. We had 5 mechanical problems. Shortly after leaving Geelong, Rolf retired with broken spoke on Barwon Heads Rd. As we were coming into Barown Heads David had a puncture from broken glass. On the Backgate bike path, Zak had a puncture from a drawing pin. In Torquay David had to replace the tube again as he had a slow leaking puncture. On Barabool Rd, Peter had a puncture from a small wire.

On a personal level, I had a cramp from Moriac where Ian retired and called home to be picked up. Tim also called for sag wagon at the bottom of Barabool Hill before Ceres. Karen also called it a day and rang her husband to pick her up from Ceres. My legs seized up with cramp as we started to climb the steep Aphrasia street in Newtown. So I walked up with Doug and Zak. Dr. Doug partially fixed my cramp by getting me to walk backwards – it works! try it. So out of 12 starters we had 8 riders left: Helen, Peter J, David I, Doug, Mike C, Zak, Chris and myself. Mike peeled off Shannon Avenue to go home, David I. had to go to work so left us in Church St only about 2 km from the finish. Peter, Zak, Chris and I waited on Western Beach Rd for Helen and Doug. After about 10 minutes we decided to finish the ride and reached Steam Packet Garden at 3.30pm. We assume Doug and Helen finished soon after.

Well done again to all riders who took part and thanks again to Helen for leading. Thanks also to Cadel and his team for devising such an incredible challenging ride. (Where was Shane today?)

Photo at the finish with Chris, Peter, Zak and me taking the photo. John M.

Helen’s note:  After waiting in Glenlieth Avenue, Doug and I (who had taken the Minerva Road route) continued on our way.  Doug still had the 13 km to ride home so his distance was more than 140km for the day.  Congratulations to everyone, and thanks to Peter for the extra photos. 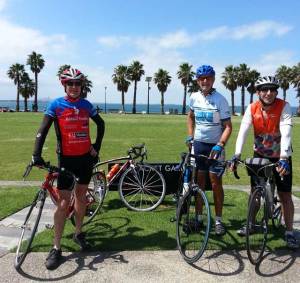 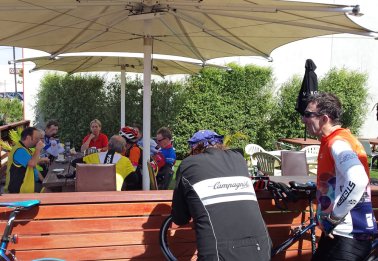 The ‘fast group’ was dogged by ‘incident’ 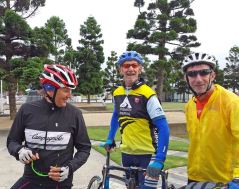 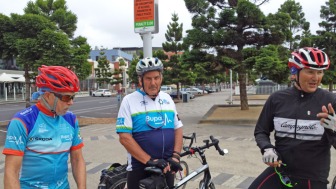 Anticipation at the start 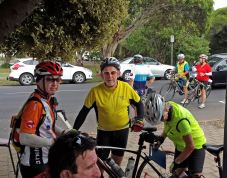 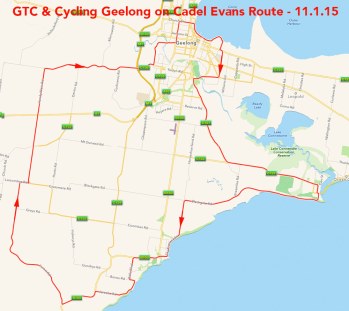 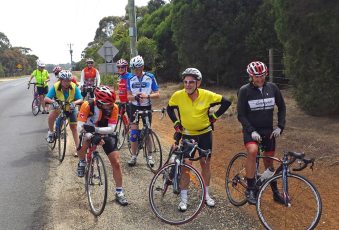 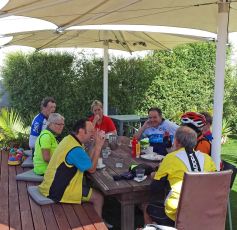