Gayle Tierney MP, Member for Western Victoria, visited Ashby Primary School in Geelong West to help celebrate National Ride2School Day on Wednesday 19 March.   She was pleased to learn that for a number of years Ashby has encouraged Active School Travel which promotes sustainable and healthy travel modes, particularly walking, cycling and scooting.   Students, parents and teachers at Ashby PS have recognised the multiple benefits of Active Travel, including:

Students eagerly gathered outside the bike shed to have their photo taken with Gayle and explained to her why they prefer not coming to school by car.  Gayle then handed out BUG (Bicycle Users Geelong) flyers to the school leaders for distribution to the rest of the school so that they could be updated on road rules concerning cyclists.

As a follow up, one of the Grade Six boys has registered Ashby PS with Victoria’s Bicycle Network and will regularly survey the school’s participation in Active Travel.

The school will also have a feature article in its newsletter and mention that Rosemary, who accompanied Gayle on the visit, is a member of Cycling Geelong.

Gayle Tierney will also present a speech in the Victorian Parliament congratulating the school on its commitment to Active Travel. 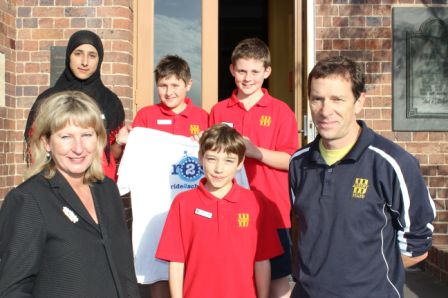 Editor’s note:  Rosemary Nugent has been active supporter of Ashby Primary School for many years.  She was instrumental in initiating the Walking School Bus program in 2003.  Since the school has become a bike friendly, Rosemary, along with fellow Cycling Geelong member Trish MacKenzie, assisted in the Bike Ed Program initiated by teacher and Cycling Geelong member Ian Dyer in 2006.  This was a major initiative for the school, where, for many years, the school administration was negative towards students cycling to school.   A sustainable bike shed was built in 2007 and the school obtained a Telstra grant in 2008 for the purchase of bikes and bike helmets and for line marking the school playground to assist with Bike Ed classes.