True to her usual form, Tina’s ride on Monday, 27th January (the Australia Day public holiday), was interesting and new.

Here is a report on the ride from Rosemary Nugent.

Six cyclists had an enjoyable time riding along the flat, well surfaced Foreshore Trail from Altona Meadows where bikes had been transported by car, across on the small, quaint punt at Spotswood to Port Melbourne and then to bustling St Kilda.

From Altona there were wetlands areas with wading waterbirds (a much prettier sight to focus on than the industrial sites) and also some more isolated and exposed areas before we reached picturesque Williamstown.  Another five kms took us to the punt which transported us and the bikes to Port Melbourne.

We had a pleasant ride along the beachfront until we reached the St Kilda foreshore path which was very crowded with lots of activity.  As the temperature was heading towards the 35° mark, we were pleased to take in the ambiance of the renowned Ackland Street from inside a café where we enjoyed cooling drinks and salads.

We sensibly decided to catch a train to Altona when we returned to Spotswood as it had become very hot.  This demonstrated to us that it is wise to be flexible with one’s plans.

The ride was about 50 kms and one that we would recommend.

This ride along the Bay Trail from Williamstown features a ride on The Punt. 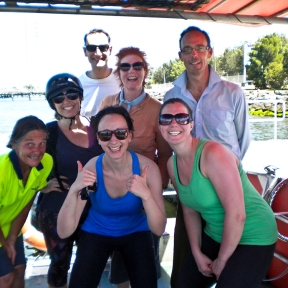 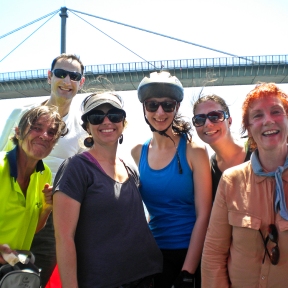